The Gatwick Airport chaplaincy is part of the British Isles and Ireland Airport Chaplains’ Network, and a member chaplaincy of the International Association of Civil Aviation Chaplains (IACAC).

IACAC Statement regarding the COVID-19 pandemic and global crisis

The COVID-19 outbreak is a global tragedy. Described by the World Health Organization (WHO) as a pandemic since 11 March, not only has it affected more than 180,000 people worldwide and killed more than 7,000 (at the time this statement was written) but it is drastically affecting the economy and specifically the global aviation economy. Tens of thousands of flights are being cancelled and planes grounded. Airports have closed terminals in an effort to adapt and reduce their costs and some airports have even temporally cancelled all operations. Chapels and prayer rooms are also being closed on several airports.

On March 5 IATA estimated the financial loss for airlines between 63 and 113.000.000 USD for 2020. Some airlines will not survive this crisis (some such as the British airline FlyBe have  already collapsed). This is an unprecedented crisis in the world of aviation and airport industry.
Not even the aftermath of the dramatic 9/11 attacks in New York matches such a disastrous impact.

As a global body of chaplains from a variety of faiths the IACAC wishes to express its solidarity with airlines, airports and the whole aviation industry. Although many countries are taking specific measures to support their economy, the IACAC expresses its concerns that those the most impacted by this crisis will be the lowest incomes and most fragile workers in airports and airlines worldwide.

The IACAC encourages its members and every airport chaplain to continually offer their support to passengers and staff alike, be a kind presence in the midst of this turmoil. We offer our sincere and ongoing prayer for each person affected by the disease and its economic consequences. We particularly ask the Creator of all things for guidance and wisdom for the leaders of our countries, airlines, airports and of the entire aviation industry as they deal with this dramatic crisis.

History and Goals of the IACAC

The first powered airplane flight was probably Gustave Whitehead’s ‘Condor’ in Bridgeport Connecticut on August 14 1901, rather than the Wright Brothers flight at Kitty Hawk on December 17, 1903. In either case, the first powered airplane very rapidly became the world’s workhorse for trade and commerce, carrying first mail, and later passengers, at speeds of less than 100 miles an hour (160 Km per hour). By 1943, the number of people travelling by air had grown beyond the world’s wildest dreams and changed international society and lifestyles forever. Soon larger aircraft, greater speeds and distances brought about huge airports located far from the metropolitan cities, creating new needs within the airport terminal buildings for passengers, crew and ground staff.

Travellers, while waiting for their flight or to change planes to continue their journey, as well as airport employees who have to work all hours and days, did not have a place or facility within easy reach that they might go to for prayer, meditation or counselling. The need for a distinct airport ministry within the airport complex was first realised in 1944 by an Eastern Airlines employee, Ed Hogg, who saw that airports had unanticipated and pressing requirements:
1. A place that is always open, affirming the many faiths that mingle at a giant airport.
2. A place set apart for individual prayer and meditation.
3. An oasis of stillness and quiet in the rush and roar of an airport facility.
4. A chaplain available for those who face emotional crisis and need personal guidance and counselling.

The first known Airport Chapel was opened in 1951 at Boston’s Logan International Airport under the direction of Cardinal Cushing. Other chapels opened soon after and in 1961, Father Xavier de Meeus of Brussels met with Father Steux in France at Orly Airport. Father de Meeus thought it would be a good idea to get other airport chaplains together and in 1967 ten priests met in Brussels and founded the International Association of Civil Aviation Chaplains, which has met annually ever since. Airport chaplaincies support travellers and staff of all faiths as they cope with the stresses and problems, including emergencies, which may arise during airport daily operations. 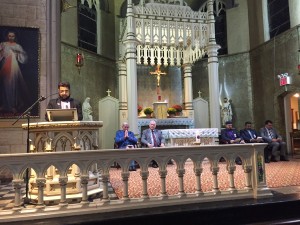 This Association is an ecumenical group of civil aviation chaplains whose work consists in the priestly, pastoral and prophetic ministering to and with people who work at and use airports/civil aviation. Its purpose is to nurture ecumenical and spiritual relationships in the world. This is to be accomplished through meetings at various locations, normally once each year. The laity is welcome to participate in these meetings since they are the prime movers in starting most of the chapels.

Today there are some 148 known airport chaplaincies in more than 39 countries.

For more information about the IACAC please see their home page